Contact us today to learn more about our academic programs at Central Penn College by completing the form below.

Serving Our
Students Since
1881

The chilly evening outside didn't dampen the spirits inside the Forum as Central Penn graduates were abuzz with the usual pre-commencement preparations. A string trio even greeted graduates and their families outside as they arrived.

The president's cabinet (above) all flashed a thumb's up in the Green Room with speaker Tracey Jones. Meanwhile, students took plenty of selfies while they waited to be called. 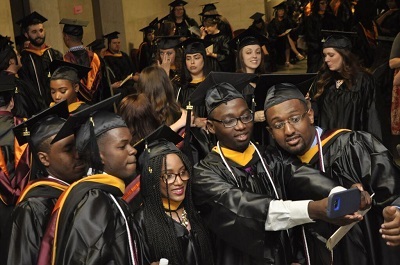 After the student procession, Dean of Student Affairs Dave Baker welcomed the students and their families to the event.

Dr. Linda Fedrizzi-Williams, Vice President of Academic Affairs greeted the crowd and conferred an Honorary Doctorate of Letters to our speaker, Tracey Jones.

"I stand tall because I am on the shoulders of so many greats who came before me, says Jones, adding "Never forget, none of us is as smart as all of us." Her thoughtful address concluded with, "Your academics may be ending, but your real education is just beginning. It's called life." 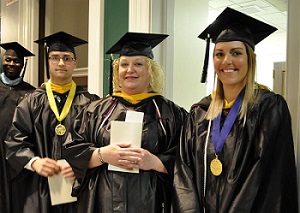 The accounting program boasted the top three academic performers. In her remarks, valedictorian Morgan Gerz stated, "Today we graduate. What matters in the end and what matters today is that you did it!" Salutatorians for the class of 2017 were Erin Anthony and Adam Swartz. Left to right are Swartz, Anthony and Gerz.

Dr. Krista Wolfe, dean of the School of Nursing and Health Sciences, and faculty Emeritus Lynn Shuster presented a very surprised professor Kevin Otto with the 2017 Dr. Karen M. Scolforo Faculty Excellence Award. One student described Otto as "very clear on his expectations from the beginning of the course, well organized and related the material to my field of study, which kept my interest going." Another student remarked, "Professor Otto was always available for all of my questions and provided excellent feedback on all assignments and posts. His guidance and assistance has helped me to write better posts and overall become a better student." 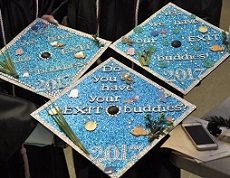 After the degrees were conferred, Eric Gutshall '10, alumni council president, congratulated the students and welcomed them to the Alumni Association. 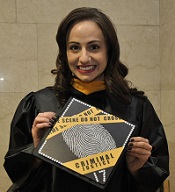 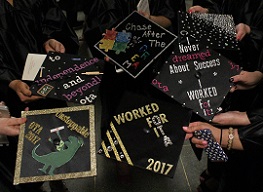